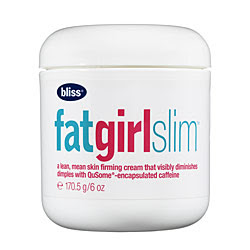 I am happy to announce that Bliss World Holdings (that is their nasdaq name and all) a.k.a Bliss Spa has been sold to Steiner Leisure Limited ( courtesy of Globenewswire) for a whopping $100 million dollars.  I am so doing my happy dance right now.

As Super-Dee-Duper as this is...I am not surprised only because I know first hand how kick butt amazing this company has been for quite some time.  So here is the Fat Girl Slim on Bliss Spa: In July 1996 Marcia Kilgore (founder of Bliss Spa) opened her first location in SoHo, and then in March of 1999 LVMH announces they have a major stake in Bliss Spa to the tune of $30 million smackers (I'd say that is pretty major).  Oh, and by the way this was LVMH's first North American acquisition.  Way to Go Marcia!

Then in January 2004 Starwood Hotels & Resorts (they own The W Hotel) acquired Bliss Spa from LVMH for $25 million in cold hard cash.  After this occured Starwood opened up Bliss Spas in several of the W Hotels with the first being in NY November of 2004.  What a smart marketing idea...The W used Bliss Spa Products as amenities in their hotel rooms.  Unlike some local 5 Diamond wannabe MotorCityCasinoHotel & Bootleg Spas (oops that was personal).

After that Bliss Spa Parterned with Jet Blue Airlines In April of 2006.  This partnership offered airline customers flying from one coast to another an exclusive Bliss Kit.  I am not sure what happened but this only relationship only lasted 1 year.

And now this total and complete awesomeness, and proof that The Spa industry is here to stay. Whew-Whoo to you Bliss Spa.